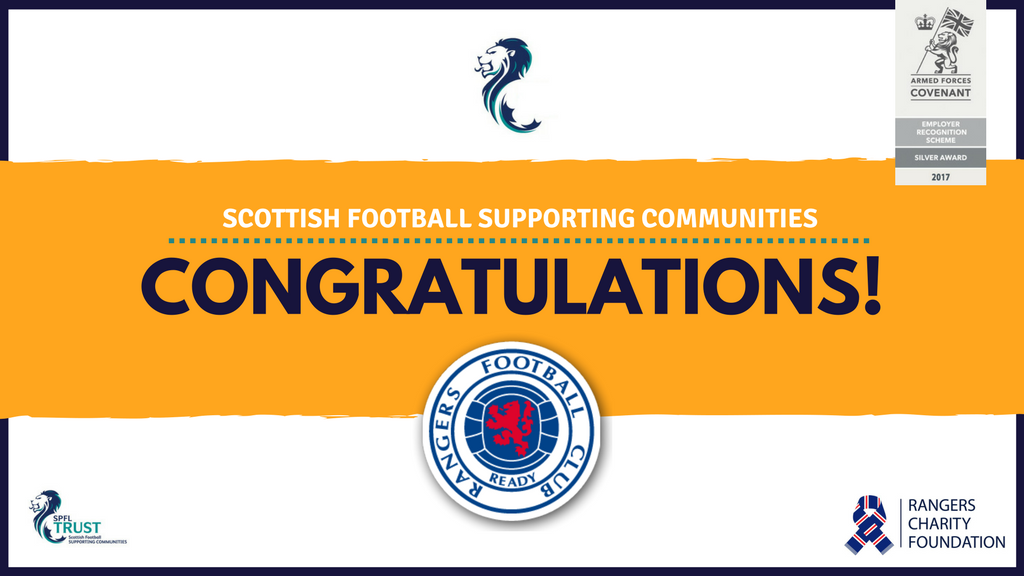 The Rangers Charity Foundation and Rangers Football Club will be honoured with a special award from the Ministry of Defence in November for their continued support of the Armed Forces.

This prestigious award comes following the Foundation and club’s commitment to the Armed Forces Covenant last season, which built upon years of support for the Armed Forces and services-related charities.

The foundation and club will be recognised at a gala dinner in the Great Hall of Edinburgh Castle where the Employer Recognition Scheme Silver Award will be presented to Connal Cochrane, Director of the Rangers Charity Foundation.

Every year the foundation helps to organise an Armed Forces Day event hosted by the Club, which incorporates community engagement activity delivered by all three services and a can collection in support of our Armed Forces Partnership, which selects services-related charities every year to assist.

They have donated over £125,000 in cash to services related charities over the last five years, as well as in-kind help to dozens of organisations that support serving personnel and veterans. Donations have included over £52,000 to veterans’ charity Erskine and £40,000 to ABF The Soldiers’ Charity, as well as donations ranging from £5,000 – £7,500 to many other charities such as Combat Stress, Poppyscotland, SSAFA, RNRMC and the RAF Benevolent Fund.

A sombre and respectful Remembrance event is also held at a home match in November in front of a packed Ibrox and includes a wreath laying ceremony and the observance of a minute’s silence prior to kick off marked by the firing of an artillery gun. 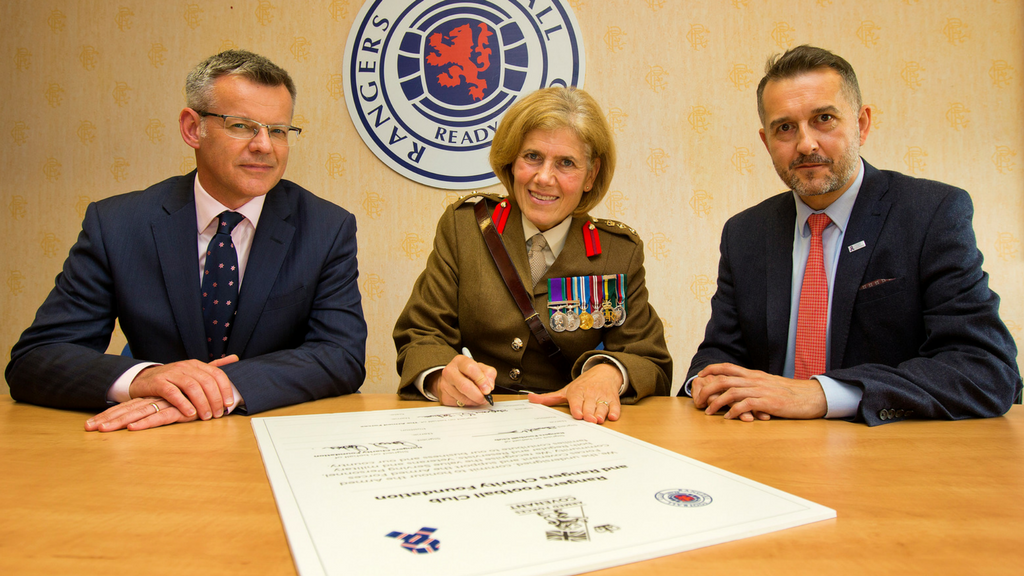 The club and foundation donate tickets for veterans via the foundation’s Tickets For Good scheme and Glasgow Veterans United programme with Glasgow’s Helping Heroes ensures veterans have the assistance they need to get back on the path towards better health, self-confidence and employment in civilian life. Serving personnel are also able to buy tickets for home league fixtures at a reduced price (subject to availability).

Royal Naval Regional Commander Captain Chris Smith said: “The Royal Navy are extremely pleased to hear that the Rangers Charity Foundation and the club will be awarded the Employer Recognition Scheme Silver Award.

“We have worked closely with the club over the last few years and have been impressed with their commitment to the Armed Forces. Each year the club hosts an Armed Forces Day event to show their support to our servicemen and women and they also host a Remembrance event to commemorate those who have made the ultimate sacrifice.

“The Charity Foundation works tirelessly to raise funds for Service and Veterans charities, setting their goals high and pushing themselves to the limits. Indeed this year the Royal Navy & Royal Marines supported Connal’s latest challenge by accompanying and ‘encouraging’ him when he walked the 79 mile stretch of the Great Glen Way in 34 hours!

“The signing of the Armed Forces Covenant earlier this year clearly demonstrated the continued support that the club and charity foundation have towards our Armed Forces and we are absolutely delighted that these efforts have been recognised.”

Connal Cochrane commented: “It means a lot to us to be granted this award in testimony to all the work we have done with services-related charities and of course serving personnel and the three branches of the armed forces. It’s particularly fitting to find out about the honour as we prepare to hold Armed Forces Day once again at Ibrox on September 9 at the game against Dundee and also announce new beneficiaries for our Armed Forces Partnership for the season.

“I would like to thank the fans who have been hugely supportive of all our work in this area, and have always acknowledged and appreciated the sacrifice of our veterans and troops. Their support enables the foundation to carry out valuable work in the community and assist many different services-related charities.”

Rangers Managing Director Stewart Robertson added: “I congratulate Connal Cochrane and his team at the Rangers Charity Foundation as well as our staff at the club who facilitate such important work in this area. It’s fantastic their constant hard work, dedication and continued support of the Armed Forces has been recognised in such a meaningful way. The club will always be delighted to host our serving men and women and veterans at Ibrox Stadium.”