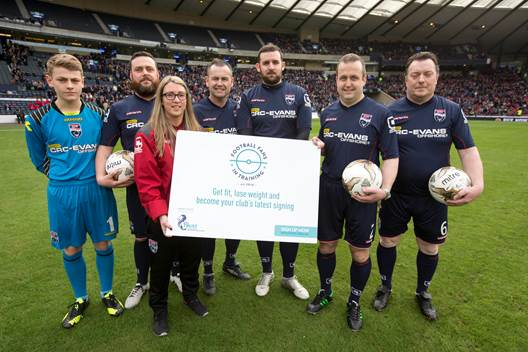 Scoring a goal in the cup final at Hampden is every footballer’s dream, however some of those who have scored there aren’t paid thousands of pounds – their objective is to shed the pounds.

The SPFL Trust’s FFIT (Football Fans in Training) programme has been running for over 5 years now, a fitness scheme that aims to tackle obesity in local SPFL clubs, encouraging men to get out on the pitch to lose weight, eat healthier and have fun.

As the half time whistle blew in the League Cup Final between Hibs and Ross County, a team of fans from each side took to the pitch to emulate their heroes by scoring a goal at Hampden.

A team of six, five outfield players and one goalkeeper, took on the “10 Second Challenge” where the aim is to run from the half way line and score a goal past the opposing goalkeeper within ten seconds.

Just like their professional counterparts, Ross County came out as winners beating their Edinburgh rivals 7-3.

Lifelong Scotland fan, Craig McLean, has travelled all over the world with the Tartan Army, yet today’s half time show was one of the highlights of his life.

“It’s been a great day so far, I’ve really enjoyed the final and it’s been one of the most amazing events of my life.

“To score for Ross County in front of our own fans was absolutely amazing and I had a good celebration as well!”

Despite the loss Hibs supporter, Ali McGregor, feels that for once the expectation is on him rather than his team to deliver results, even if the results are weight loss.

“As football supporters, we always make demands of players – you lead the right lifestyle and you eat and drink well. I’ve flipped it on its head and I thought ‘here’s a challenge that Hibs have given me to get myself fit and lose weight and if I fail, I’m letting the football club down’.”

The work that the clubs do inspired the players at FFIT too as they get more of an insight into how the club is ran.

“I didn’t really have that many expectations but to get close to the club and take part in one of the training sessions with [Ross County Assistant Manager] Billy Dodds was great. It was an experience to play with a former Scottish international so it was good fun,” said Gary Beech, after celebrating their win.

There wasn’t a shortage of quality either – James Stewart of the Hibs team managed to score a screamer past the County keeper curling it in the top left hand corner.

“It was a great experience thanks to SPFL Trust and all the fans who made it fantastic. It was an absolute beauty, best one you’ve ever seen at Hampden!”

The County team celebrated their win, but there were no losers today. Both sides came away with a lifetime experience and inspiration to continue on the path to fitness. 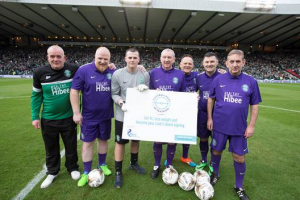