In partnership with Santander, the SPFL Trust have taken on two masters students from Glasgow Caledonian University (GCU) as multimedia interns.

Daryn MacRae and Calum Woodger, currently studying on the university’s MA Multimedia Journalism programme, will work with the Trust for the duration of their degree and will keep you posted every step of the way through their monthly blogs.

Read on below for their first update.

Walking up to Hampden to start our first day with the SPFL Trust we were immediately excited and taken aback by the sight of the stadium. Having spent many a great night supporting the national team and our own clubs at the home of Scottish football, it was quite a surreal experience to be calling it our office.

We were shown around the corridors of the top floor offices and introduced to the team entrusted with delivering the SPFL Trust’s transformative initiatives. Expecting numbers of upwards of 20, we were amazed to learn a small team of only 6-7 full-time staff are behind programmes like Football Fans in Training (FFIT), H2-O and Festive Friends.

Everyone was very welcoming, and we were able to sit down and plan content for a busy week where the Trust was launching its Legacy 2014: Scottish League Cup report ahead of the 2016 final between Aberdeen and Celtic.

We were thrown straight into action on our second day with the SPFL Trust as we attended the launch of the report. Aberdeen and Celtic legend Joe Miller took questions from the assembled media while we broadcast live across platforms including Facebook and Periscope.

We also accompanied the cup final mascots on a tour of Hampden, and shared their ‘Mascots’ Journey’ across social media.

To top the day off we were able to get a sneaky photo with the trophy both teams were dying to get their hands on: The Betfred Scottish League Cup. Not bad for a Monday morning. 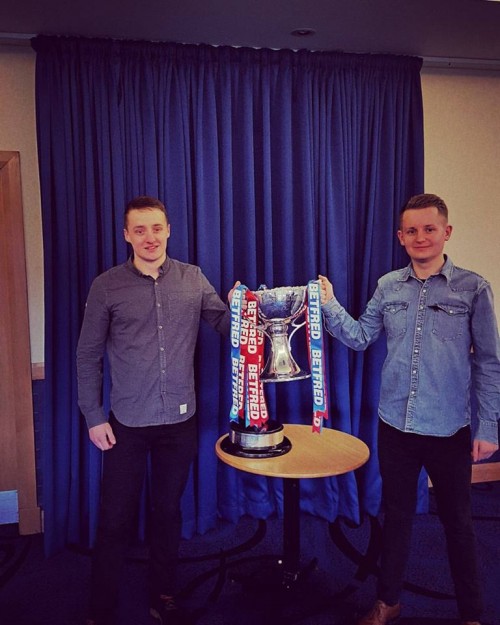 The day had come, the Betfred Scottish League Cup Final, Aberdeen v Celtic and the perfect platform for the SPFL Trust to showcase the fantastic work in does in Scotland’s communities.

Continuing to follow our mascots journey we streamed more live video, this time of them walking out on to the Hampden pitch with their heroes to the dramatic backdrop of fireworks and crowd displays.

The SPFL Trust’s cup final half-time showpiece, the ‘Half Time Challenge’, featured participants of the FFIT programme and we once again captured the best of the action. Aberdeen and Celtic fans each had ten seconds to race from the half-way line and beat the goalkeeper, a competition the Dons won 1-0. Unfortunately for the Dandies, Celtic went on to lift the trophy after winning the match 3-0.

Since then we have been planning trips around some of the 42 SPFL clubs to highlight the good news stories of the initiatives being delivered by the SPFL in partnership with programmes at Scottish teams.

Stay tuned for the first ‘Spotlight On’ article this Friday as we speak to Paul Kelly and Diane Scott from the Partick Thistle Community Trust.