The official charity of Hearts FC has teamed up with the group who will be donating £20 for every goal scored by Hearts FC with all the proceeds going to Big Hearts so far, the total donated stands at £940 with 47 goals already being scored. 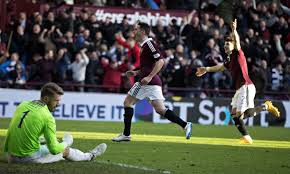 “It is wonderful to see another group of Hearts’ fans supporting us at such an important time for the charity. As I said last month, Big Hearts will become a charity for families and we want to lead the way in a very new approach to social responsibility in football. The support of the ‘Sinky for Hearts’ group, in providing us with such a donation is invaluable and very much appreciated. You can take it for granted that we will be cheering every goal Robbie and his team score even louder now!”