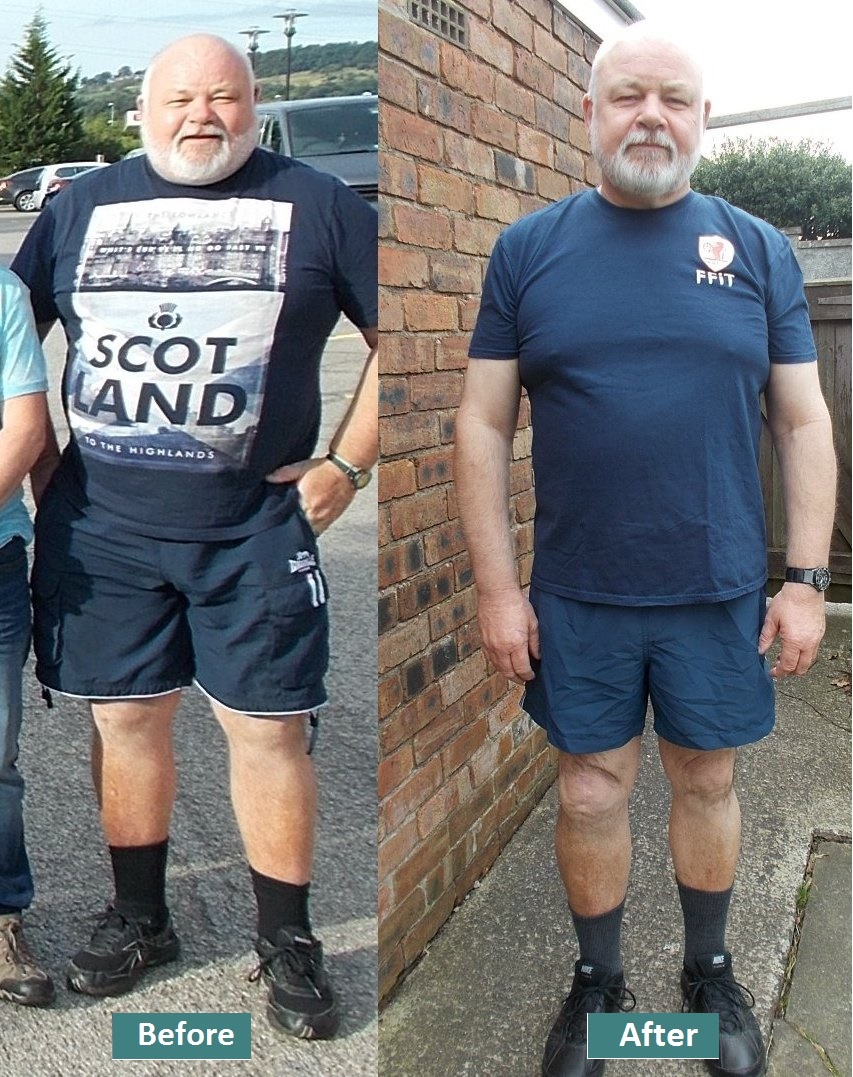 Before & After Becoming Fit (FFIT)!

In his own words, Mike Brown, ex-graduate of Raith Rovers Community Foundation’s Football Fans in Training (FFIT) programme, tells us why he decided to join FFIT and how the programme has helped him improve his lifestyle choices.  Read more below.

Hi. I’m Mike Brown.  My Life was a bit of a mess. 59 years old – then feeling at least 10 years older, grossly overweight and gaining daily. Drinking everyday and following the most terrible diet in terms of the quantity and the quality of food.

6 months later, I have turned 60 years old and now feel at least 10 years younger. 5 stones lighter and losing daily. I’m drinking much more sensibly and I follow a much healthier diet.

I exercise regularly which I I struggled to do before the simplest of physical tasks.

The catalyst for this complete turnaround was Raith Rovers FC.

In September 2015, in partnership with the SPFL Trust, a number of coaches of the club embarked on a health & fitness programme, aimed at surprisingly not the cream, fitness-wise of the football club’s fans, but the less than perfect , older, maybe fatter, unfit guys that wanted to make a positive change in their lives.

I don’t know what made me look at the Raith Rovers website news on the 7th of September last year. My visits to the club site were mainly just to see match reports and highlights, but that night something caught my eye……’GET FIT FOR FREE!’ From that moment my amazing journey to a new life began.

The news item was promoting the Football Fans In Training (FFIT) programme – it was aimed at me! Aged 59 (between 35 & 65), overweight (tipping scales at almost 23 stone), 51 inch waist squeezing into 46 inch trousers(if I could get any) and oh so desperate to change my lifestyle.

I just had to respond to the notice. Head of Community Development, Paul Doig, replied inviting me to the ‘signing on’ session and I grasped the invite with both hands. Signing on night came around. It is funny looking back, 20 or so guys with varying degrees of unfitness, and with no clue to what lay ahead, got weighed and measured and we began our journey.

Tutored and mentored by the brilliant Glenn Milne, a former FFIT participant and presently a coach, we were shown the way to a better & healthier lifestyle.

FFIT is not a ‘diet & exercise’ programme. There is no diet to follow and no exercise routine to adhere to. It is an education. I learned about what my body required to get me through each day, and then how to obtain those requirements in a healthier way – nutrition, portion size, fat & sugar content etc. It opened everyones eyes & minds.

There was exercise of course – no extreme workout style training but a regime that enabled everyone to participate at their own pace & ability.  The aim was always for small, steady, achievable improvements.

Taking on board what I was hearing I began to change my eating habits avoiding previous unhealthy favorites (and not missing them) and introducing newer, healthier foods. The changes required are not huge – a little less of this and a little more of that, ditch the fryer and get out the steamer. Makes a huge difference.

Exercising – I did what I could do given my ‘old age’ . Walking was what I do most easily and, so I did, as much as I could!

During the 12 week programme it never felt that I was dieting. I was eating all the time! It’s amazing how much fruit & veg one has to eat to replace 3 bacon rolls! Even so, it surprised me every week as my weight kept on dropping.  As my trousers were, at the start of the programme, at least 5 inches smaller than I needed it took a bit of time before they themselves became too big.

As the programme progressed I began to lose the fear of not being able to keep up with everyone else but a new fear gripped me. What happens when the programme ends? I was scared that I could not maintain and continue the lifestyle I had come to follow. Thankfully that hasn’t happened and I am still enjoying the benefits that the FFIT programme instilled within me and I continue to enjoy my new, enlightened, healthier lifestyle.

Throughout the course, we were told that we alone were responsible for what we put in our mouths , the exercise we did, and ultimately, the shape we were in. This is true, but I know that I could not have achieved what I have done without the help, encouragement and support of so many other people.

Paul Doig, the Head of community development at Raith Rovers, Glenn Milne FFIT mentor & coach, Raith Rovers FC, the SPFL Trust and every single person that took part in the very first Raith Rovers FFIT campaign. To you all I would like to express my deep gratitude and thanks.

Special thanks to my fellow FFIT-ers.  Friends forever!