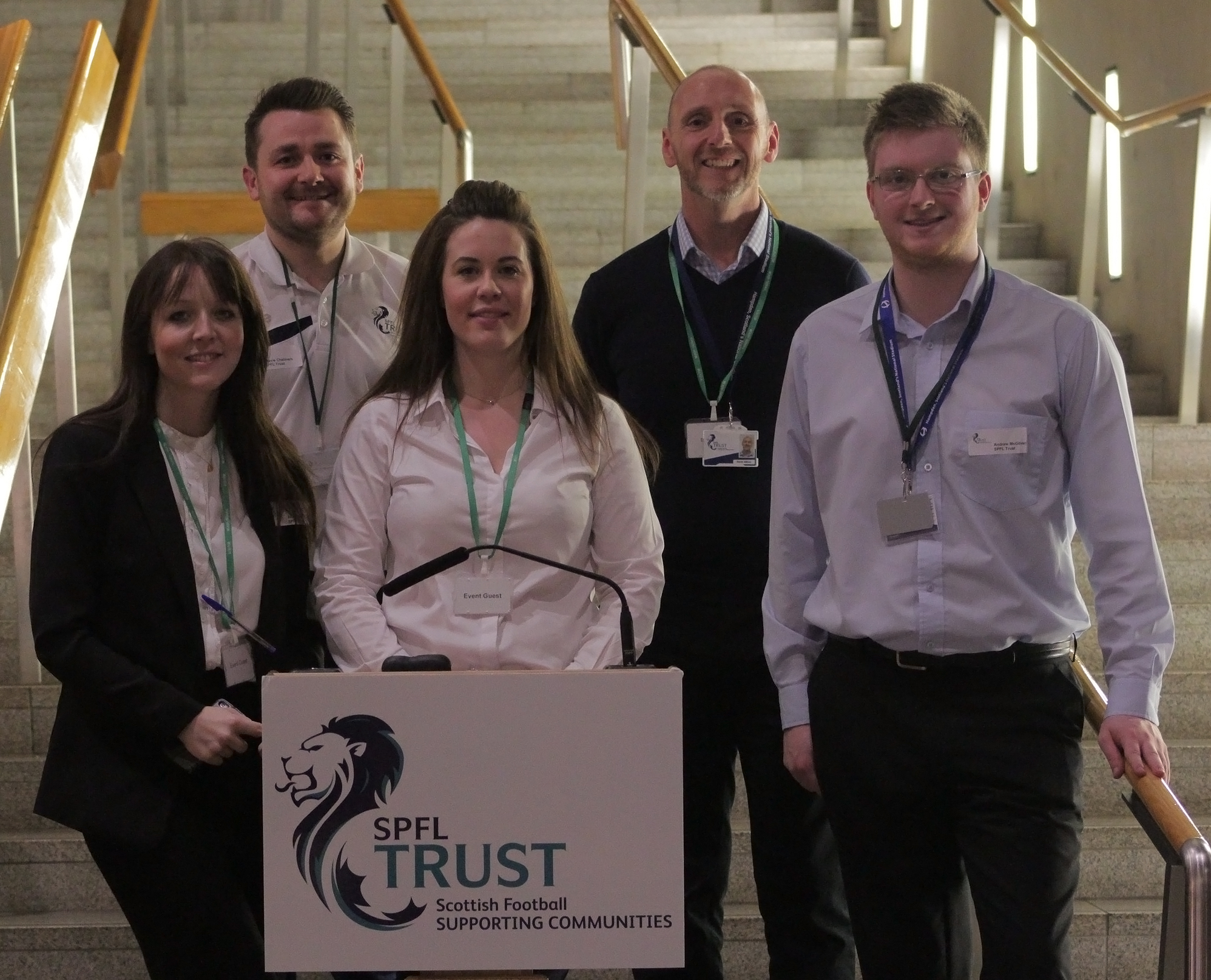 In this week’s ‘Spotlight On’ series our attention turns to the team at The SPFL Trust.

The Trust recently hosted an event at Holyrood, the Scottish Parliament building in Edinburgh. The team went along to showcase their game-changing community work in partnership with Scotland’s 42 league clubs.

Representatives from clubs such as Greenock Morton, Livingston and Rangers were in attendance, alongside MSPs, to underline the power of football to change lives.

SPFL Trust manager Nicky Reid spoke at the event to highlight how 30,596 people were supported by £500k of Scottish Government funding.

Mrs. Campbell said: “Tonight is so important, it’s about good news. It’s about the side of the story we don’t get a chance to here,  it’s about celebrating the successes that happen on a daily basis because of football.” 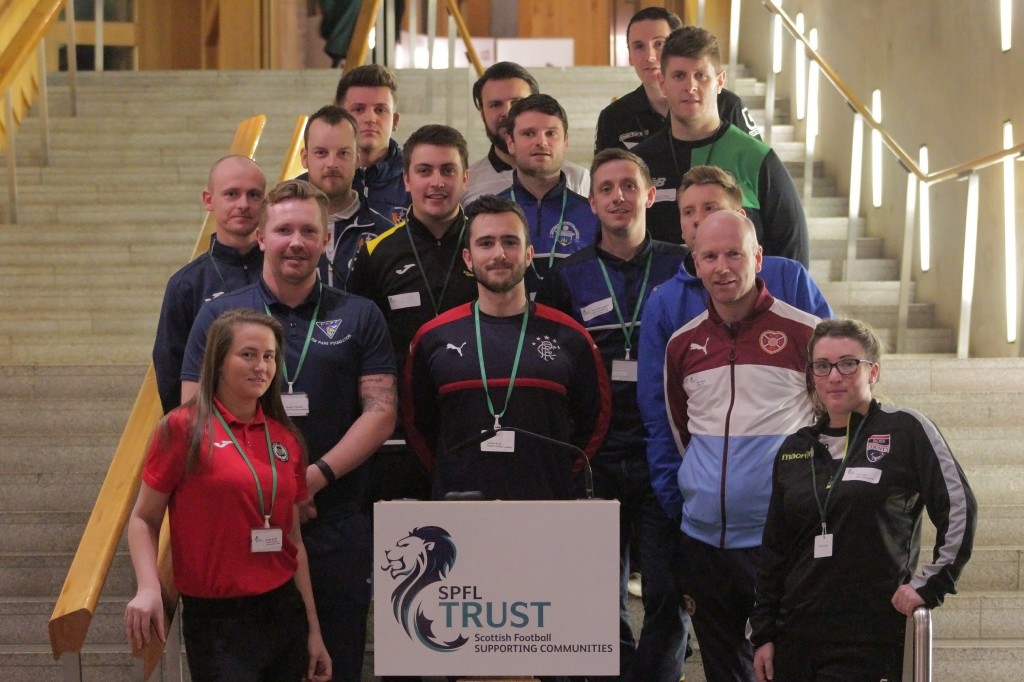 Coaches from the SPFL’s community trusts were in attendance.

Derek said: “One of the reasons for the event is not just to increase our own awareness amongst MSPs and fundraisers, but to share what the clubs do in their communities.

“MSPs and organisations turned round and said “I didn’t realise that the club did this or had the capacity to do this” and that proves to us we’re achieving our goal. Part of our role is to champion the clubs and get that message out there to the right people. It was about how well the clubs can tackle the social issues within their communities.”

Stevie agreed that the event was invigorating for MSPs unaware of the breadth and depth of the work the Trust do.

“I think you could see a few light bulbs switching on in the heads of MSPs who’ve had to deal with real social issues like employability, obesity, and mental health,” he said.

“When I was delivering FFIT there was a guy, Kieran, who was 20-stone plus and on the first session when we asked why people were doing it his response was, “I want to see my little girl grow up”. That had a real impact on me.

“We’ve got these hubs of the community in football clubs where people go to watch football and I think the MSPs gained a lot from the event about this.” 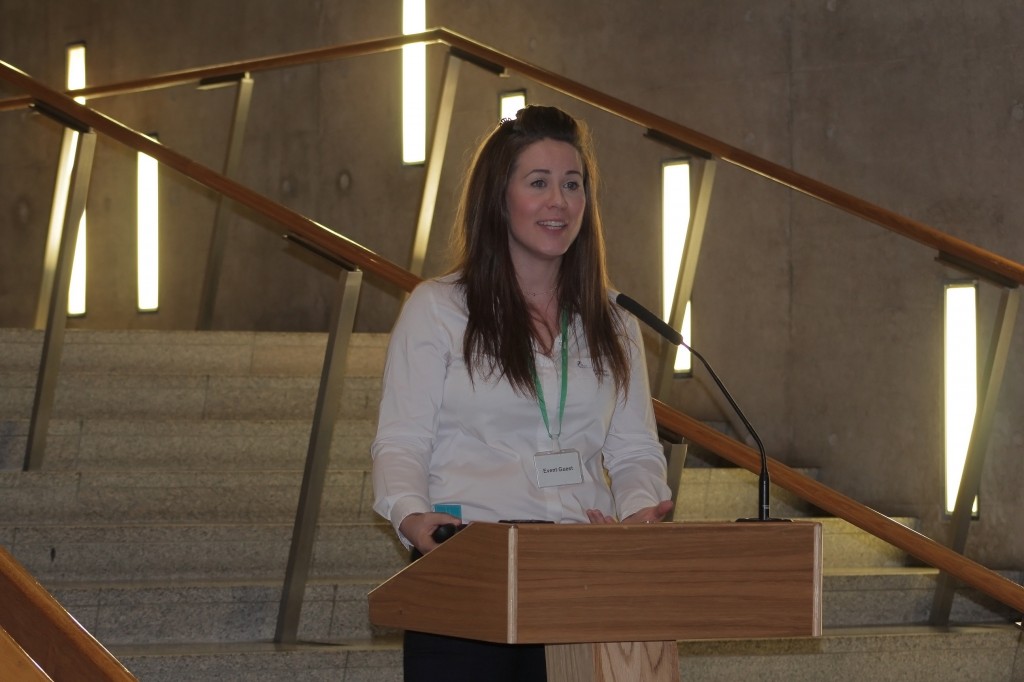 Alison added that the success of the SPFL Trust is down to the coaches that deliver the projects.

She said: “The message was that we don’t just deliver football but a range of education, mental and physical health initiatives. However, ultimately it’s the coaches’ delivery that makes the programs so successful. You can’t bottle their enthusiasm and the great work they do is much appreciated.”

Data input officer Andrew McGilveray added: “It was good to get the clubs along so they could talk about their side of things and how they deliver the projects. I think it really interested MSPs coming out of the chamber.”

Derek believes that the work they do will continue to have a great impact so long as the engagement with communities continues.

He said: “The great thing about working with 42 clubs in 42 different local communities is they all have unique problems, so each provides bespoke projects to fit the demands of the community. The night emphasised to a lot of people the real power of football.”

Watch the video below for more from the event.