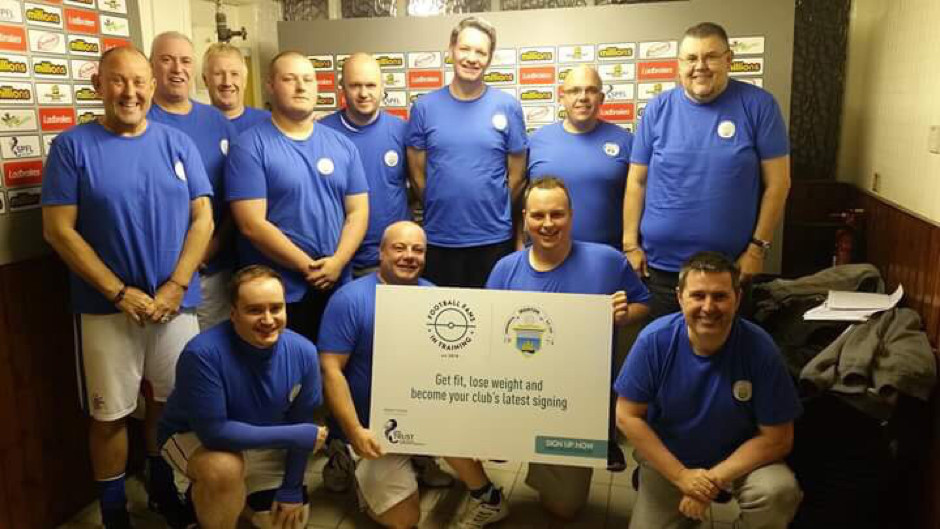 Brian was able to explain how one community coach has become more popular than half the Morton squad and how Football Fans in Training (FFIT) changed the life of local provost Robert Moran. 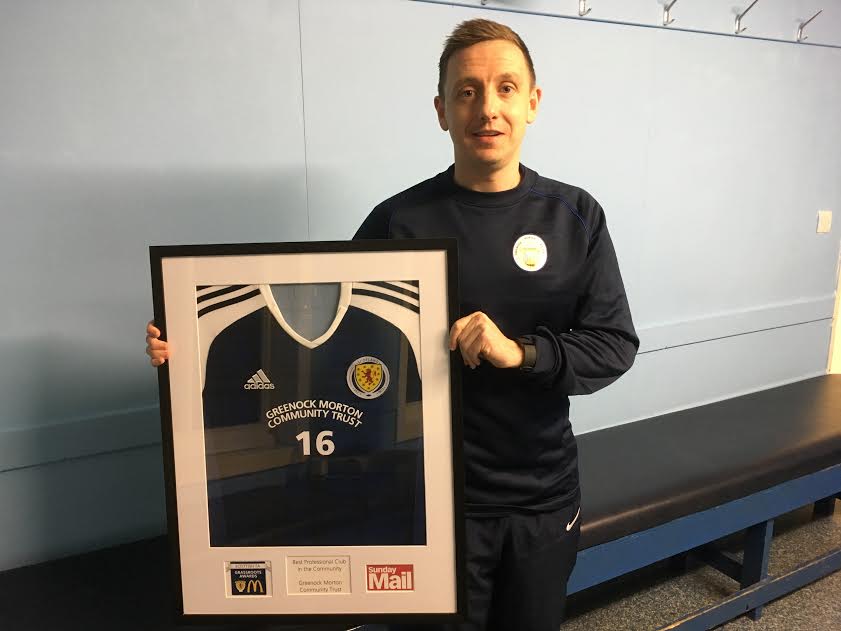 How would you describe your role here at Morton?

“My role is to oversee all football activity which starts from our nursery programme through to our Football Memories. Our youngest player is 18 months and oldest player 83. I look at the growth and sustainability of programmes, but also look to provide football in this area for our residents whilst tying in local health issues.

“I also oversee three full-time staff, ten part-time session staff and about 73 volunteers. It’s quite a big set-up at the moment, in the last three years we’ve just grown and grown and it’s been a good place to work, very busy.”

The Trust won the Best Professional Club in the Community from the SFA’s Grassroots Awards 2016, was it nice to be recognised?

“Yeah well funnily enough my role is part-funded by the SFA so I was at the awards in 2015 when Aberdeen won it and I was thinking ‘oh I’d love for us to win that one day’ so for us it’s good because effectively we’re one of the smaller clubs in terms of the badge. For us to be recognised nationally as being the best professional club in the community shows we’re doing the right thing. It shows that working probably 7 days a week for a couple of the years has been worth it.

“Yes we probably shout about it a bit more and try to brand it, but we’ve only got it for a year and it’s good to share it with the parents, kids and participants from all our programmes.”

How helpful are the club in assisting the trust in reaching its goals?

“The chairman sees the benefits, people are asking him in the supermarket about Football Fans in Training, and he’s starting to see the benefit of a community trust as opposed to just Saturday at three o’clock. This year was the highest ever sales of football strips for kids for Morton which we try and tie our holiday programmes into with Morton day and make sure they wear blue and white.

“The manager and players do as much as they can, they come to hand out certificates, speak to the employability programme, just to provide role models for people. The kids all aspire to be them. Football makes you a wee boy, no matter what age you are.”

Can you tell me more about Micro Morton Nursery Programme which has engaged 2671 children cross 26 nurseries in improving fundamental movement skills?

“The SPFL Trust League Cup funding allowed us to knock the door of the nursery and let them know we’re coming in and we’re not going to charge you a penny. Initially we picked one nursery and, this is crazy, we did sports science testing with the kids at aged 3-4.

“The results are staggering. They’re all based around fundamental movement skills, we class them as transferable skills because we’re not creating a footballer at 18 months old, we’re helping these kids to fall in love with sport, give them proficiency of fundamental movement skills like running, kicking and jumping which then transfers into other sports. If they want to do dancing, netball we’re giving them a start.

“After that we were able to receive funding to roll it out to more nurseries and I think we engaged with around 1100 kids, which we’ve sustained to this day. My colleague Paddy McAlees goes out and delivers that. The community trust is just under four years old, so originally Morton was just what you see on a Saturday afternoon like most football clubs, it’s a hidden place you don’t know what happens Monday to Friday. The trust gets the badge out and builds trust.

“The biggest thing from the nursery programme is kids go home and tell their parents ‘Paddy was at my nursery today we need to go to that class on a Wednesday night’ and their parents are like ‘who’s Paddy?’ and with the greatest respect to the Morton players and manager, Paddy is a hero in Inverclyde where kids would know him more than they would know most of the players.” 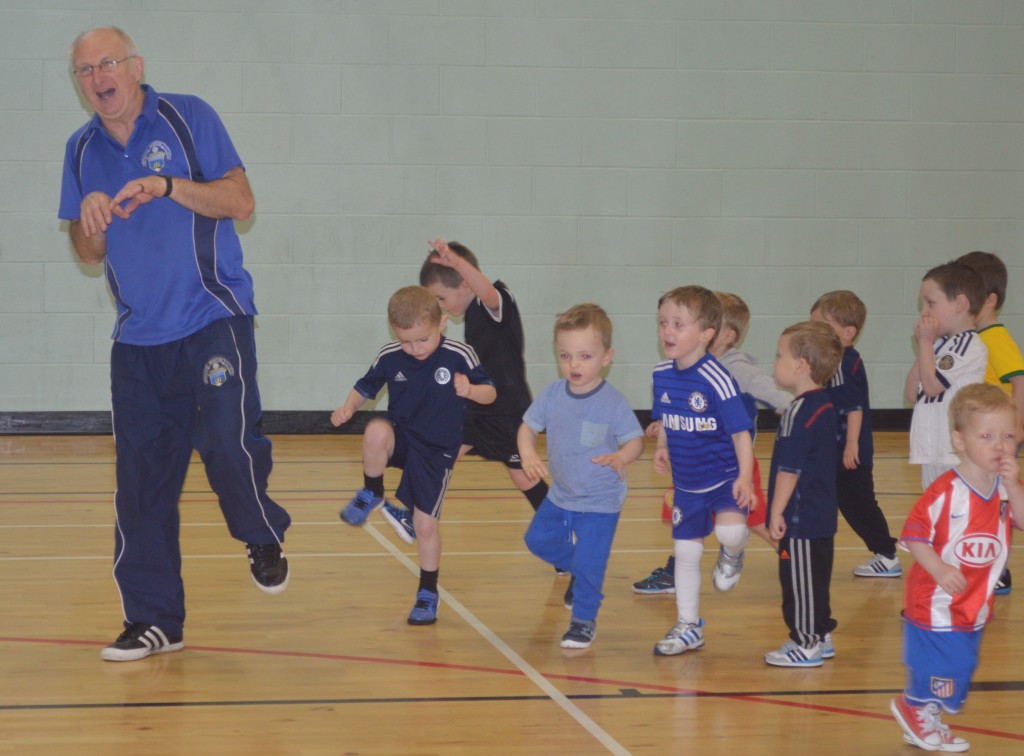 How has your version of the Football Fans In Training programme been received?

“We’ve delivered three male and one female Football Fans in Training programmes, three of which have been funded by the SPFL Trust, we’ve got our next two starting in March. It’s probably the best programme for engaging with fans. The fans love the club no matter what, yes sometimes they hate them on a Saturday at quarter to five, but naturally your fan has loyalty, they will come back.

“We get to engage with the fans as a community and they get to come behind closed doors where they don’t really see normally. We get good news stories out of it and ultimately change people’s lives through good messages, offering our services for free, so it’s been received very well.

“Our local provost Robert Moran was on our last programme and I actually had to do a double take the last time I seen him because I didn’t recognise him, he’d lost so much weight. One guy come off of medication for diabetes because of the programme, one guy moved from Police Scotland to the Ministry of Defence because he lost so much weight and met their criteria.”

How have you been getting into the festive spirit over the Christmas period?

“The kids come to the games as a Christmas treat from our community teams and with our classes we try to change the games so that it’s more Christmas related. Next year we’re going to look at doing something different, maybe open the club up and give elderly, homeless, unemployed people a meal.

How do you see your relationship with the SPFL Trust developing in 2017? Any new projects on the horizon?

“With the SPFL Trust we’re going to deliver the Parents on the Ball programme which is in partnership with Action for Children. That’s due to kick off in February so that’ll be a good pilot with us, Inverness and Hearts all involved. We want to continue with Football Fans in Training obviously and in a few weeks time hopefully be heading to the parliament to speak about Parents on the Ball and other education stuff.”