Rangers FC set to encourage people to discuss whether they would like their organs donated when they are deceased. 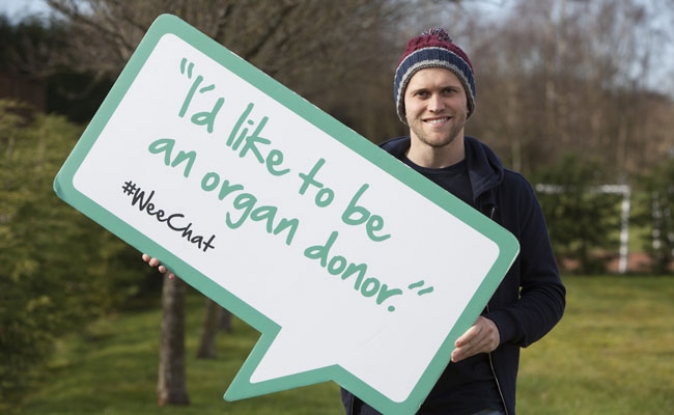 The Gers Midfielder Nicky Law put on his number 7 shirt in hope that it would increase awareness of how the seven words, ‘I’d like to be an organ donor’ can save up to seven lives.

The Organ Donation Scotland team was at Ibrox to raise awareness about the number 7 campaign.  At the latest fixture against Alloa Athletic, the club got talking to their fans as they entered the ground in hope to raise better awareness.

Although many think that joining the NHS Organ Donor Register is enough, Organ Donation Scotland would encourage individuals to share their organ donation wishes with family and friends.  This approach remains fundamental to relatives honouring a loved one’s choice in the event of their death.

Since 2010/11, the family authorisation rate for organ donation – when a family member agrees that donation can proceed – has increased from 57.1 per cent to 61.6 per cent. If the rate was to further increase to 80 per cent, around 90 more lives could be saved each year.

Researchers have also shown that almost half of the people in Scotland – roughly about 45% – haven’t discussed their organ donation wishes with any member of their family. Scottish football clubs including St Johnstone and Hamilton have also been given their backing to help encourage fans to have a ‘wee chat’.

Nicky Law who wears the number 7 at Rangers said:  “I’m more than happy to use the number 7 on my jersey to raise awareness of this very important campaign.”

To find out more about organ donation and to join the NHS Organ Donor Register, visit www.organdonationscotland.org