We are delighted to reveal that the SPFL Trust has secured a commitment for a further £1.25m to support communities around Scottish football.

The donor wishes to remain anonymous, a request which will be respected by the charity.

From the immediate donation, £280,000 will be made available to club associated community trusts, who will be eligible to receive £10,000 to support their efforts during the Covid-19 crisis.

Around 150 activities, supporting thousands of isolated and vulnerable people across the country, have been delivered from a standing start, since Scotland went into lockdown in early March.

A further £220,000 will go towards the launch of Scottish Football United.

Scottish Football United is to be a major new project launched later this year. It had previously hoped to secure traditional grant funding in 2021 for a 2022 launch, but since funding was secured plans are now being put in place at speed.

Further detail will follow, but in principle, Scottish Football United will bring together clubs, governing bodies, with national and local public agencies to create a focal point for future crisis planning and support. This will enable Scottish football to react and support communities quickly, and at scale.

The gift aid part of the immediate donation – representing £125,000 – will be used to support programmes that did not previously have funded settlements for 2020-21, the 4-4-2 Reading Challenge, A-Team, and Festive Friends. 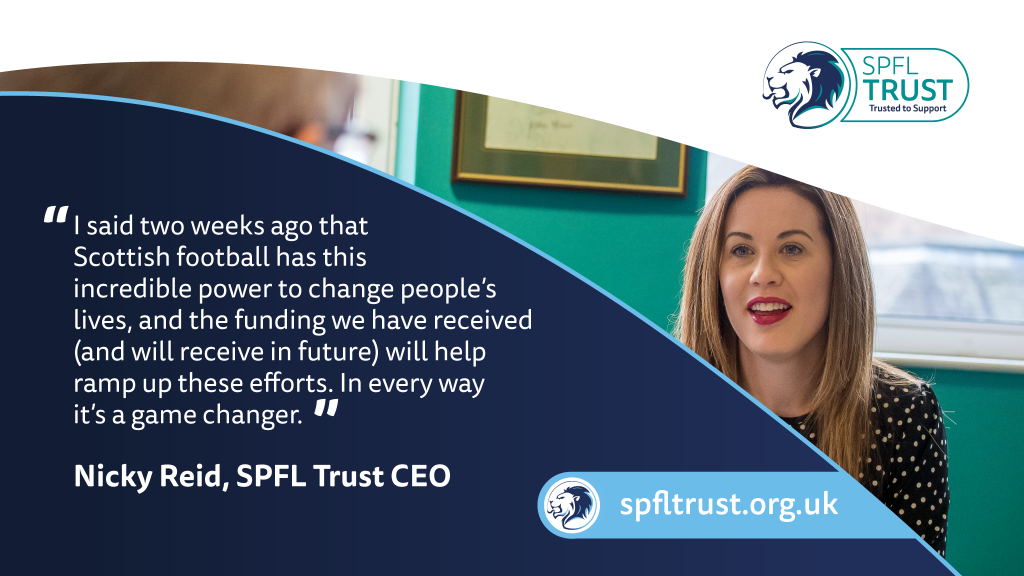 Two weeks ago, James Anderson, a fund manager and partner at investment firm Baillie Gifford, donated £3,125,000, inclusive of gift aid, to the SPFL Trust to support Scottish football at this time of crisis.

The club Covid-19 Crisis Fund has a value of £2.1m and is now being paid out in £50,000 grants, after all SPFL sides were determined to have passed eligibility criteria.  The other £1,025,000 is being split into two parts: Scottish Football United and the Anderson Fund.

A new restricted fund will be set up, The Anderson Fund, which will be used to fund new projects, which demonstrate a positive impact on health, attainment, or inclusion as well as any general related support during the Covid-19 crisis. Details of this will also follow.

“When James Anderson said he believed that his donation would be the start of something, he was absolutely true to his word,” our chief executive Nicky Reid said. “James has brought forward someone else who’s donation and future commitment will make a significant difference to the lives of so many.

“Although I cannot name the donor who has stepped forward to support the SPFL Trust and club associated charities across the country, I want to acknowledge their extraordinary generosity. They have seen the amazing power that our clubs have to support those in need, in Scotland.

“The initial donation will enable us to now launch a £280,000 fund to support club-associated charities, enabling them to continue their important work. Each will be able to apply for £10,000, and like the club fund we will aim to process this as quickly as possible.

“I said two weeks ago that Scottish football has this incredible power to change people’s lives, and the funding we have received (and will receive in future) will help ramp up these efforts. In every way it’s a game changer.

“For example, earlier this week we revealed that at least 17 SPFL clubs will set up testing facilities across the country, using the Club Covid-19 Crisis Fund grant, enabling community access, and in effect creating a football network to support the country’s efforts to move forward, safely. This in itself is the type of principle we want to bring to bear with Scottish Football United.

“I’ve always said that our league in Scotland has the propensity to be the most community engaged league in the world. Never has that moment been closer.”

How does the commitment work?

Who is eligible to apply?

Charities registered with the SPFL Trust and the Office of the Scottish Charity Regulator on 31 May 2020 will be able to apply to the Community Covid-19 Crisis fund. They are: